Evolution Of The Vacuum Cleaners (Timeline)

Evolution Of The Vacuum Cleaners, Undoubtedly, “necessity is the mother of all invention.” That couldn’t be more true than with the evolution of vacuum cleaner.

The majority of middle-class Americans couldn’t afford rugs or carpet during the 17th century, and the hardwood floors they had were able to be quickly and easily cleaned with a broom and dustpan.

We studied and outlined the exciting history of vacuum cleaners by the timeline below.

William Sprague co-founded the first carpet mill in Pennsylvania, essentially founded the carpet industry in America. During this time, woven carpets were still expensive and considered to be a sign of luxury.

Thanks to Bigelow’s invention of the power loom, carpet production doubled in the first year and tripled by 1850. Now the carpet is suddenly within the budgets of middle-class Americans.

1860 – Who is the first inventor of vacuum cleaner?

Evolution Of The Vacuum Cleaners, The first vacuum cleaner was invented in 1860 by Daniel Hess. It was the first mechanical vacuum designed for cleaning carpets. It had a rotating brush and large bellows used to create suction.

Surprisingly, it never became mass-produced, but started the history of the vacuum cleaners.

His vacuum had a hand-operated crank with a pulley that powered a fan at the base to create suction. 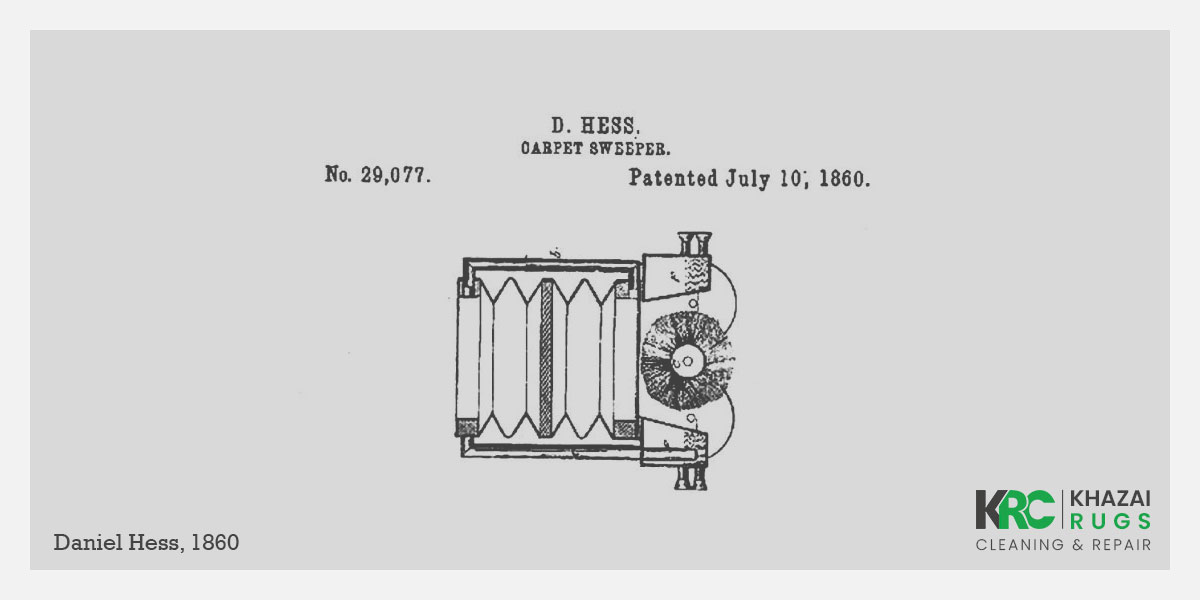 Melville and his wife, Anna, ran a business selling fine china. Most of their fine china and glass arrived in crates packed with sawdust, which spilled over and covered their shop floor. 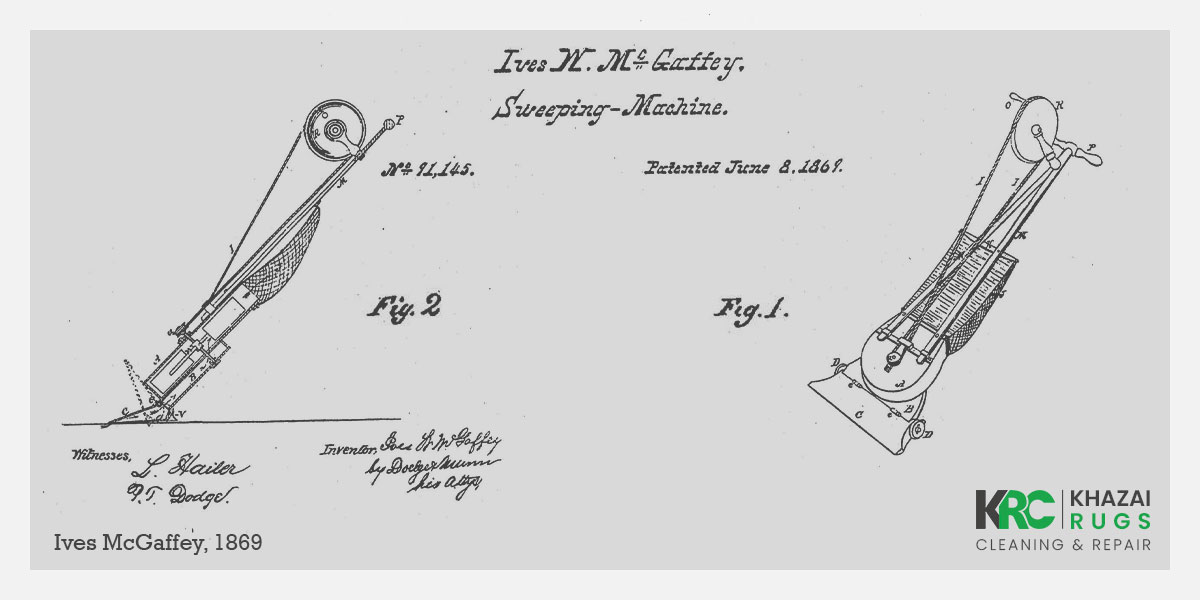 Mr. Bissell purchased a carpet sweeper, named the “Welcome” despite its poor design, Mr. Bissell made significant improvements to the device.

After only seven years, the Bissell’s had dominated the carpet sweeper market nationwide and even expanded overseas.

Thurman’s design created an air blast that blew air into the carpet, forcing dirt and dust into a collection receptacle located above. Quite the opposite of vacuuming. 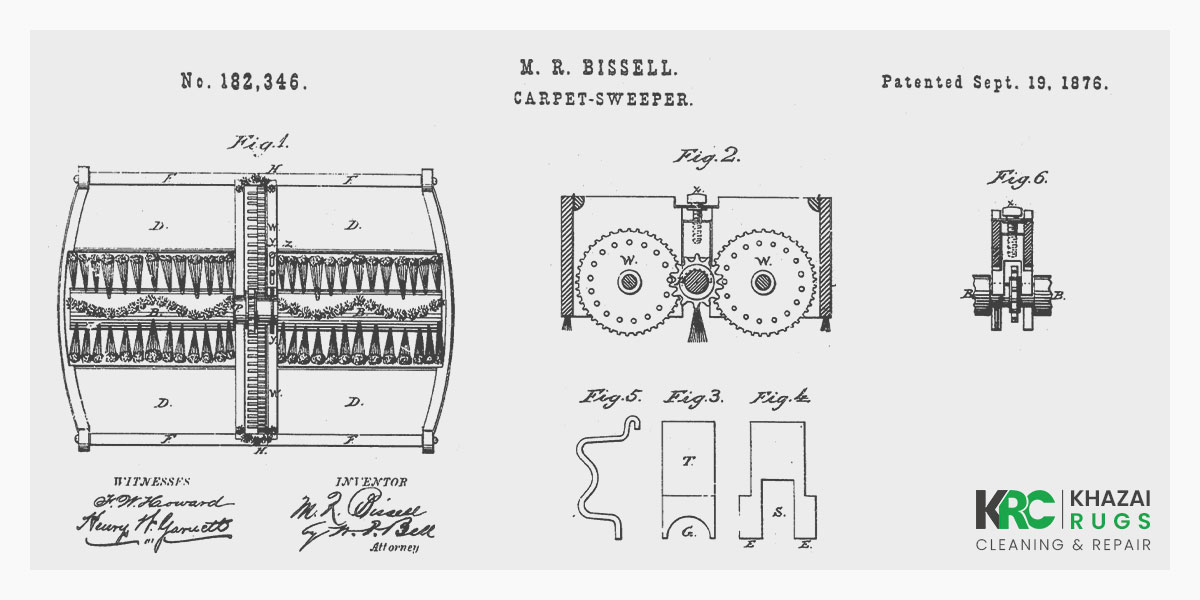 By simply adding an electric motor and covering the rollers with a moistened sponge, Mrs. Dufour takes the sweeper’s simple design to the next level.

Booth’s combustion engine was so large it had to be transported with a horse and carriage. He parked the device on the street while feeding long hoses through the windows and doors of houses for cleaning. Booth would charge $4 per house visit, roughly the equivalent of $135 today.

Griffiths model featured bellows that created suction attached to a flexible hose. It was the first cleaning device that could be carried without aid and operated by one person. 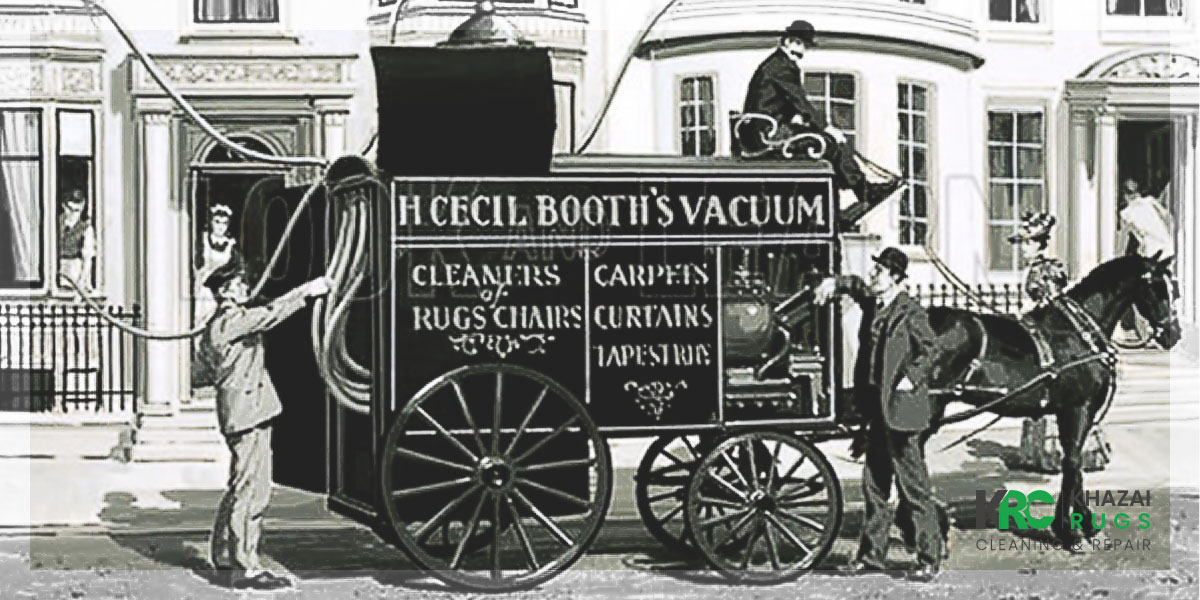 Kirby vacuum history is quite remarkable. Kirby’s cleaner was the first to use water to collect dirt. His model needed two buckets of water for one use. Also, the owner had to frequently empty those buckets. 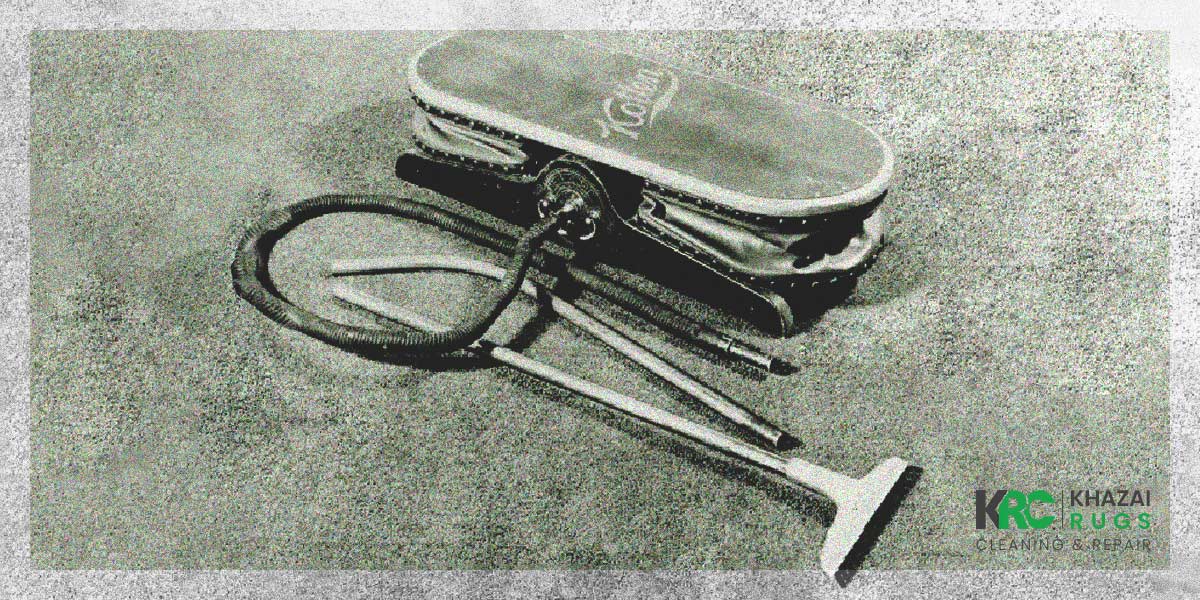 He made two different models. One was sold for $25 and had to be pumped by hand, while the other model was $85 and had an electric pump.

1908 – The First portable vacuum cleaner with a motor

Spangler’s model featured a soapbox with a fan that created suction. It also had a rotating brush, which agitated the carpet and loosened dirt. It was the first portable vacuum cleaner that took advantage of motors. 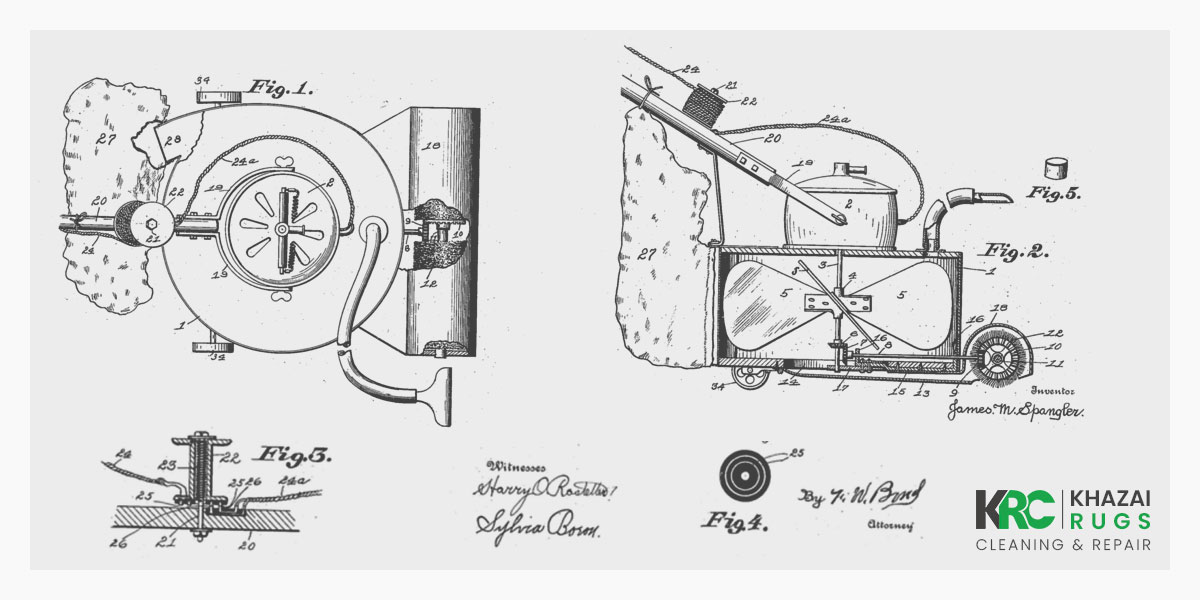 1909 – The Eureka Vacuum Company was founded by businessman Fred Wardell

The Eureka Company initially only sold vacuum cleaners made by other companies. In 1913, Wardell purchased a small factory with four business partners to make Eureka brand vacuum cleaners.

This small electric motor could be powered using AC or DC and would later be used to power many vacuum cleaners, effectively making them smaller.

The Scott and Fetzer Company makes and sells vacuum cleaners under the Kirby brand name.

1920 – The first vacuum cleaners with disposable dirtbags are made by Air-Way Sanitizer of Toledo OH. 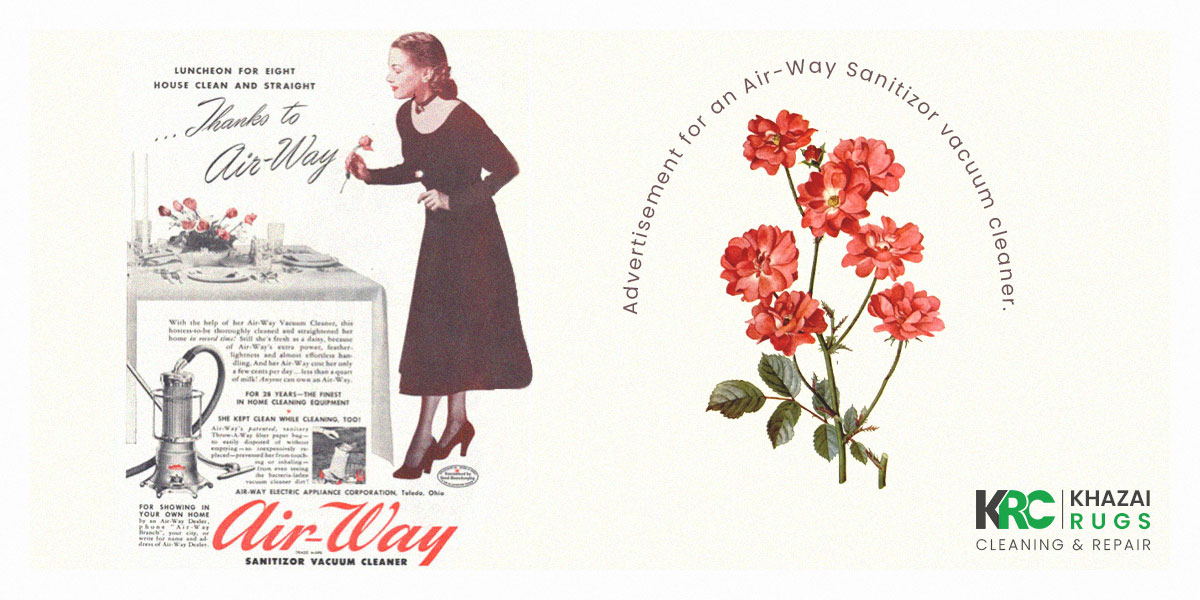 1921 – Electrolux makes the first canister vacuum with metal bars to slide over the carpet.

Electrolux launched its Model V in 1921 with the innovation that could lie on the ground on two thin metal runners. During the 30s, the German company Vorwerk started marketing vacuum cleaners based on their design, sold through direct sales. 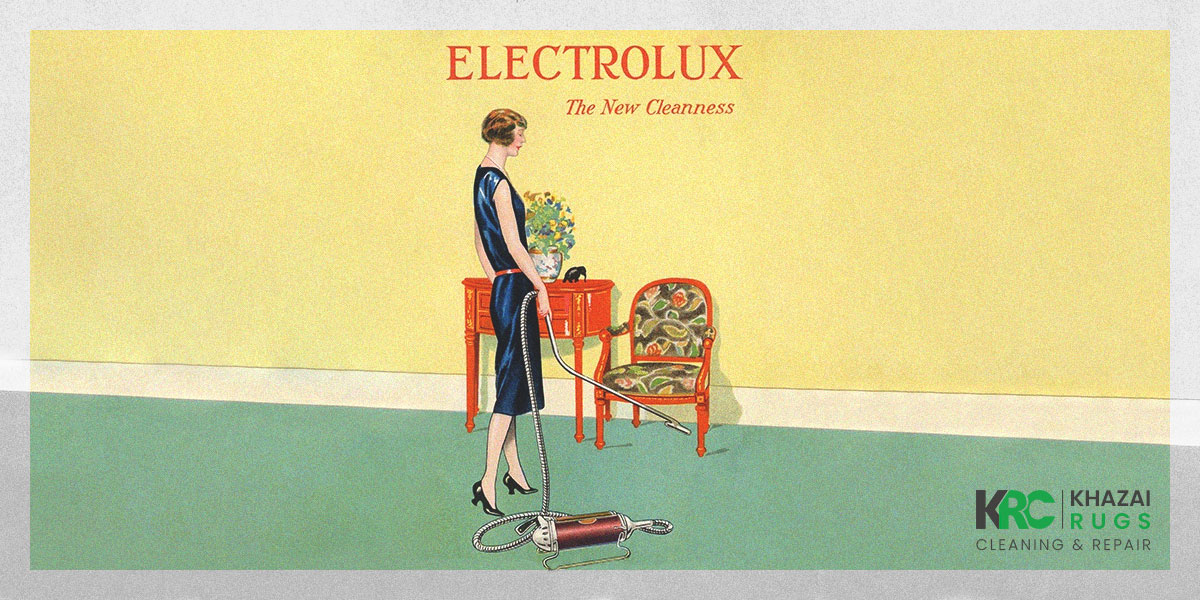 The company launched the Kirby Model C in 1935, which was the first product with Jim Kirby’s brand name. They also introduced the Vacuette as a manual vacuum cleaner after a little while, using a spring-loaded worm gear operated by pulling the vacuum cleaner backward when pushing the device forward. 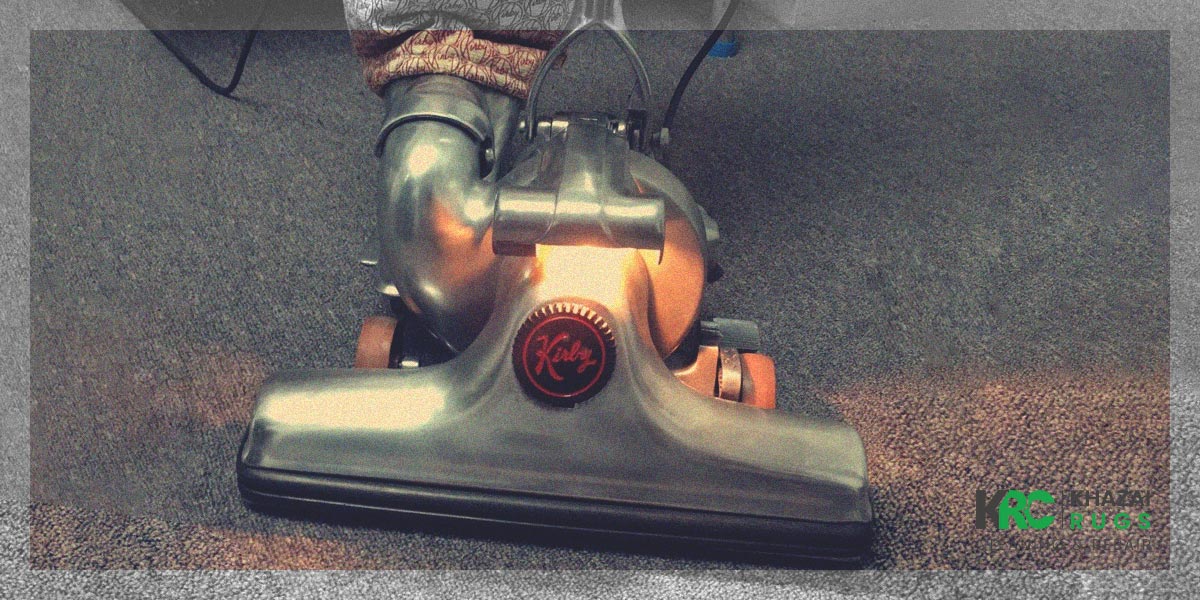 The worm gear would transfer power to a turbine that was there to produce suction. As long as one pulled the device backward, the spring tension would remain steady, and the turbine would keep on spinning. The marketing target was rural regions that didn’t have access to electricity, and the design resembled a manual carpet sweeper.

1963 – Commercial use vacuums begin to be made by David Oreck.

Mr. Dyson makes approximately 5147 different prototypes before he designs one with which he is satisfied.

1978 – James Dyson begins research on how to build a better vacuum.

Mr. Dyson makes approximately 5147 different prototypes before he designs the one with which he is satisfied.

As time went on, vacuum cleaners developed more and more, and they progressively were made with more powerful motors made to have more suction power.

So naturally, you would think that the vacuum with the most suction and the most substantial brush/beater bar would be the ideal choice to clean your rug, right?

Evolution Of The Vacuum Cleaners, Unfortunately, the answer to that question is no. Keep in mind that vacuums are to clean carpet, not wool rugs. The powerful motors and beater bars used nowadays in vacuums could potentially wreak absolute havoc on hand-woven rugs.

The suction and vibrating beater bars create vibrations that could, over time, loosen the knots in the strip of rug fibers and cause them to unravel. The rotating beater bar could also catch the fringe, causing irreversible damage to the foundation of any hand-made rug.

Vacuums are supposed to clean hard floors or carpets. If you have to use a vacuum on your rug, turn the rotating beater bar off. Always vacuum long ways, rolling the vacuum cleaner in the direction of the fringes. Furthermore, when you get the end of the rug, never sweep over the edges, but use a rake or brush to straighten them.

Ideally, to ensure your rug doesn’t come into harm’s way, only use a mechanical sweeper for cleaning it at your home.

This is a Manual Sweeper

As already explained, vacuum cleaners wear out the rug in the long term, so the best technique to clean your rug is using manual sweepers, which clean up the rug without putting pressure on the foundation and knots. 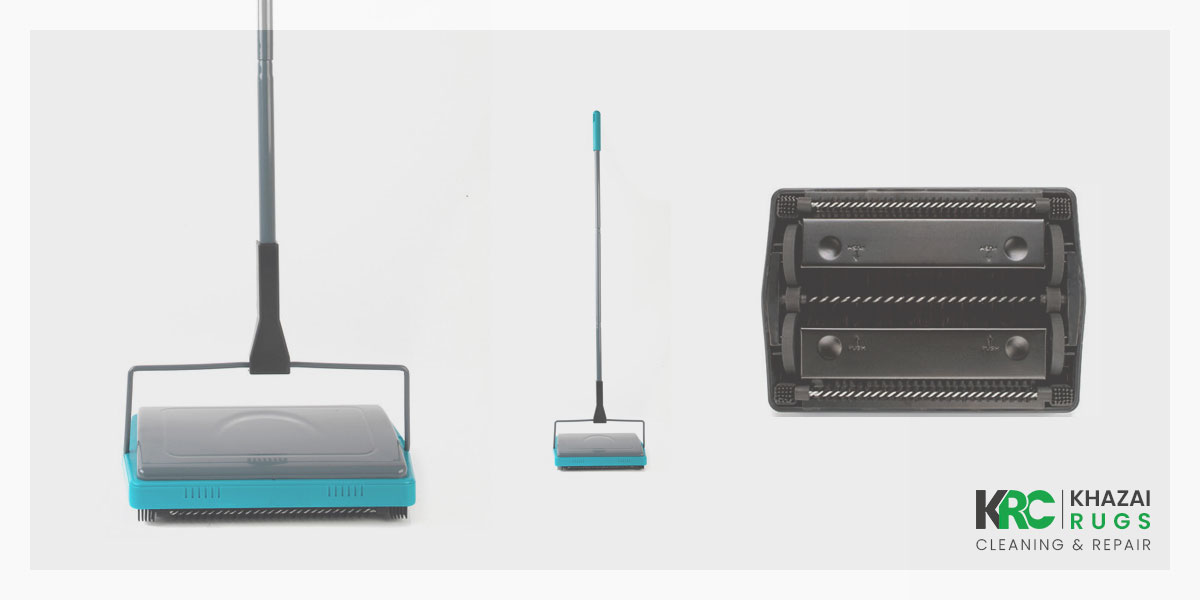 Evolution Of The Vacuum Cleaners, You can get them at any home appliance store, and the price is also quite reasonable.

Finally, we highly recommend you to follow these simple steps to increase the lifespan of your rug dramatically, and remember to have them professionally cleaned every 24 to 36 months by your friends here at Khazai Rug Cleaning!

Get A Free Quote
Scroll to Top